More than a year into the pandemic, many of us are languishing – we’re exhausted, lethargic, and feeling guilty for spending so much time doom scrolling through social media and streaming apps.

Kyle White, on the other hand, has never felt better.

As Canada’s CBC reported last week, White has lost 150 pounds since going into lockdown about a year ago, completely overhauling his habits, health and lifestyle in the process.

“A little over a year ago, I stepped on the scale and I was around 430 pounds,” White told the CBC. It was at that point that he vowed to make a change.

He started small by committing to walking his dog each day, extending the walks a little further each week, and eventually getting into hiking.

But the biggest change has been to his diet, which he says is now “about 98 per cent free of animal products.”

“It takes a lot of hard work, but the conditions that we had the past year kind of gave us the time, which was, maybe, a hidden benefit in the mess that was 2020,” he told the CBC.

Check out the video above to learn more about how White lost “a whole person” worth of wait. 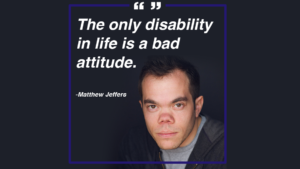